Odin Makes The Samaritan From Hellboy 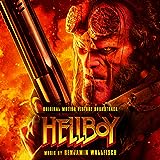 Hellboy: Into the Silent Sea

new Buzzfeed Unsolved episode idea: what happened to Johann Krauss at the end of Hellboy II

HOT TAKE: the real reason i have insomnia is because i’m haunted by not being able to recall the end of the second Hellboy movie

WHY can i NEVER remember what happens at the end of Hellboy II: The Golden Army after Prince Nuada is defeated - DE… https://t.co/6O6lFg6Uau

Doug Jones plays a bit part as Eraser Head (he erases crime). We had a conversation about who he was (Shape of Wat… https://t.co/hVO6a0YU7C

there's nothing I want more than a college age stoner buddy comedy starring hellboy and abe sapien. i would literal… https://t.co/aNjNL8bzEm

@nezumi_ningen @socialistdogmom It possibly sounds like it might make sense if it were used in a Hellboy comic a plot?